Vivekananda Kendra Vidayalya (NEEPCO) Bokuloni embraces a passion to work for a green and clean surrounding. Eco club is one of the intergal parts of our school curriculum and a member of NGC (National Green Corps). Our Eco club - Aranya-Sikha organized a Cycle Rally on 23rd April 2022 as a Mass Education Awareness Campaign supported by PCRA (Petroleum Conservation and Research Association) for the cause of Conservation of Energy. As a part of the program, two competitions were held:

* Topic for Placard/Slogan – “Conservation of Energy”

* The pictures/snapshots of the Placards were asked to be sent to WhatsApp group for judgement and then hung in front of the cycle on the day of the rally.

* The paragraph written were asked to be sent to the WhatsApp group. All the contestants were requested to take part in the Cycle Rally to boost the morale of the students and help create awareness. 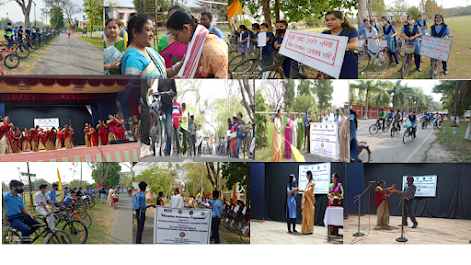 Many Schools participated in the event and made it fruitful. The Schools were: Purbanchal Karikari Uccha Madhyamik Vidyalaya, Ekalavya Junior College, Ushapur Higher Secondary School, Bhadoi Model School. Two students each from DPS Digboi and Maria’s Public School Ghy, who were on vacation, were very enthusiastic about the event and also participated in the Cycle Rally and Placard writing competition. Lady Parents and Teachers also took part in the Rally.

The Program started at 8 am with Mangalacharan. Smt. Chandana Pathak, coordinator of eco-club spoke about the importance of the event. Smt. Mitali Goswami, President of Ladies Club (NEEPCO) Bokuloni was invited as the chief guest and was felicitated with Fulam Gamusa and a token of Love by Smt. Gita Sharma and Smt. Jyotsna Srivastava respectively. General instructions were given and Smt. Mitali Goswami flagged off the cycle rally. The cycle rally covered a distance of 6 kms inside the NEEPCO campus. The participants were provided glucose water at the ending point and were taken to the NRC hall for the concluding session. The news about the Cycle Rally was covered by journalist Jeet Dutta of Time 8 and was telecast. The awareness program was also published in print media like Amar Axom, Niyamiya Barta, Assam Aditya, Purbanchal Prahari etc.

The concluding session was organized in collaboration with the NEEPCO Ladies Club. Smt. Rakhimoni Rajkumari Gogoi anchored the program. The Program started with Mangalacharan and followed with a Chorus by the NEEPCO ladies. Smt. Nirmali Baishya, Smt. Swapnali Borkakoty, Smt. Meenakshi Konwar, Smt. Mrinali Swargiyari and some students shared their experiences about the event. A Jeng Bihu was performed by NEEPCO ladies followed by a Poem Recitation by Swapnali Borkakoty(Parent). After that prizes for Placard/Slogan writing competition were announced by Smt. Pallavi Bordoloi. The prizes were given away by Smt. Mitali Goswami to the following students.

The program continued with a group song by the students, followed by prize distribution for Paragraph writing competition. The prizes were given away by Sri. Guru Charan Das, Principal VKV (NEEPCO) Bokuloni. The winners are:

The program concluded with a motivating speech by Smt. Mitali Goswami followed by the vote of thanks by Smt. Neeti Changmai and ended with ShantiPath.

The successful completion of the Program was possible due to the dedication and diligence of all the teachers of our Vidyalaya who worked behind the scene especially the organizing team members: Smt. Chandana Pathak, Smt. Alankrita S. Baruah, Smt. Uttara Baruah, Sri. Sanjay Srivastava and Sri. Dipak Kumar.

The need and importance of Energy Conservation was highlighted for a better tomorrow. The Program concluded by striving to improve ourselves by reflecting on our eco-friendly habit-forming activities and by taking a challenge as an opportunity and not a problem.

DIKSHA APP TO CONTRIBUTE MORE IN EDUCATION GET MORE INFO

COLLECTION OF CBSE BOOKS IN ELECTRONIC FORMAT GET MORE INFO